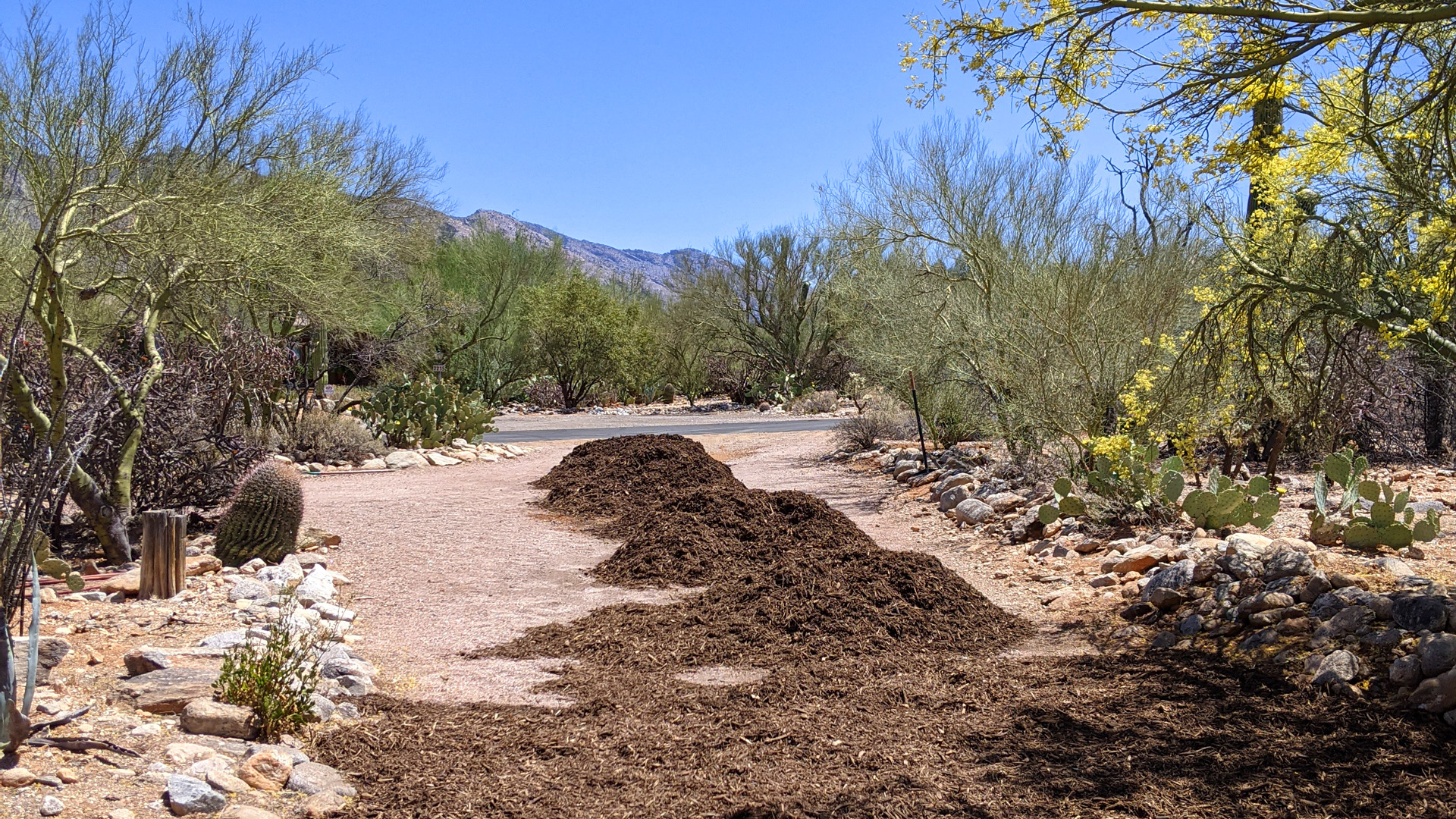 The concern for fire is one of the many questions that comes up when discussing mulch. So let's talk about some of the requirements of fire compared to the properties of mulch.

First, the potential for spontaneous combustion is extremely low, to none, due to the fact that the material is spread thin enough to not be able to build up enough heat to produce a fire on its own.

One element that fire needs in order to burn is oxygen. We encourage wetting and tamping of mulched paths, driveways, and gathering areas because it helps create a smoother surface for traveling on and also minimizes the air gaps between mulch particles and therefore the fire potential. A compacted mulch layer is perfectly fine for our needs because we are trying to encourage a mycelial network to run through the wood chip, which doesn't require much oxygen. The result is a compact, erosion resistant, highly absorptive, permeable bio paving of sorts.

Fires are more likely to occur in a hot, dry microclimate, so another way to prevent fire is to create a cool, moist microclimate. Let's talk about how mulch helps do that.

As mulch breaks down, organic compounds are oxidized. One of the products of this oxidative process is water! This is one of the ways that adding organic matter to your landscape helps hydrate the system.

As mulch breaks down, it becomes plant food or humus. Beyond achieving erosion control, you will also see an increase in plant hydration, health, quality, and vigor. And as mulch is converted into plant mass, you get more shade, more hot wind breaking capacity, and increased ambient humidity, all of which are helpful in suppressing wildfire.

Additionally, mulch absorbs heat less readily than other materials like gravel, helping to minimize heat buildup around your home.

So even in the absence of rain, mulch creates  a cooler, moister microclimate. It is helping to keep the landscape hydrated, which is a fire deterrent.

When it does rain, mulch helps retain moisture on site because of its absorptive capacity. It has a lower runoff coefficient than bare dirt or gravel. Even days after a rain event, the soil under a mulch layer will have more moisture compared to an area of bare dirt that got the same rainfall. Again, mulch is increasing the hydration of the land.

In a situation like the summer of 2020 when we had mountain fires encroaching on houses in the Tucson basin, you could also use your mulched areas as protection by saturating the mulch layer with water to help create a fire break.

So mulch can actually be used to reduce the threats of fire by increasing soil moisture, increasing plant hydration, and reducing heat in the microclimate around your home.

If you're concerned about wildfires encroaching on your property, one of the preventative activities you can spend your time on is making sure that your property, your neighborhood, and even adjacent natural areas are free of buffelgrass. This invasive species IS considered a fire hazard.